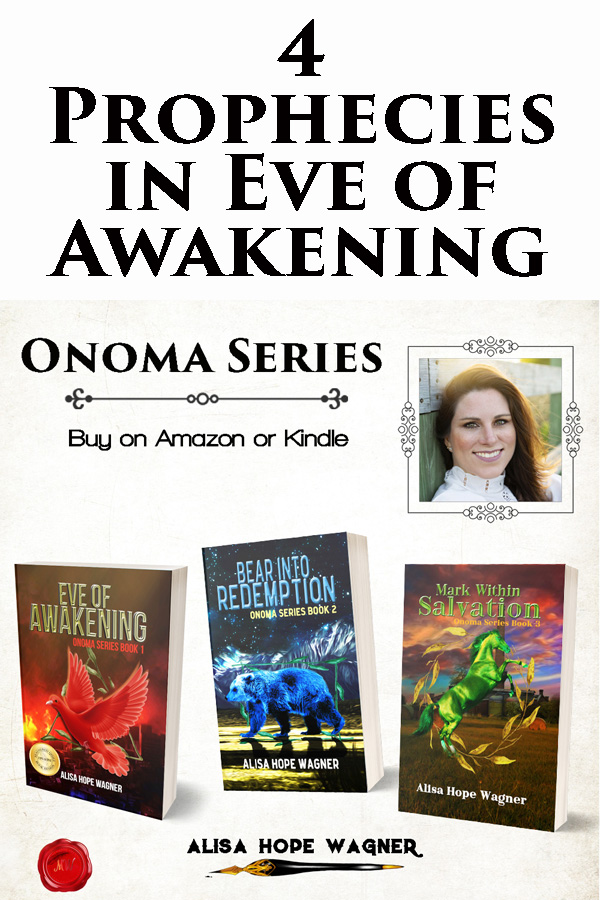 Alisa’s prophetically innovative novel, Eve of Awakening, written in the fall of 2005 and completed in the winter of 2006, predicted four major changes in western society that would make her dystopian world a reality today. Four dystopian hypotheses in 2005 became a reality for today.

1) Eve of Awakening Prophecy: Facebook. In Eve of Awakening, the author needed a place where the main character, Eve, could show off her status symbols and productiveness. Therefore, the Life Production System (LPS) was born. Since the dystopian society of “Efficientists” rarely left their homes, the LPS was the place that work, shopping and affluence were cultivated. Facebook was released globally on September 2006 and Eve’s world of social media quickly became a reality.

2) Eve of Awakening Prophecy: Smartphones. Alisa wanted the main character, Eve, to bring her Life Production System (LPS) with her when she attended Public Relation Events because idle time would not be tolerated. Alisa created the “Portable,” a smaller version of the LPS, so Eve could continue to be productive. Steve Jobs introduced the iPhone on January 2007, and idle time has quickly been replaced with Smart Phone productivity and “browsing.”

3) Eve of Awakening Prophecy: Amazon. All goods in Eve’s dystopian society of “Efficientists” were delivered to the individual homes. People were discouraged from venturing out (besides PR events) because it took time away from being productive, and they feared the outside world. Therefore, Alisa created the “Runner” system. Amazon introduced their “Cloud Services” in late 2006, and physical stores quickly began to vanish due to the popularity of online shopping.

4) Eve of Awakening Prophecy: Text Messages. In Eve of Awakening, the “Efficientists” use an abbreviated version of English to save time. The new shortened language is called Twin-Variety or T-Variety. In Eve’s dystopian society, books have been translated into T-Variety and all productivity (both written and spoken) is done via this abbreviated language. Text messaging became widely prevalent in 2007 with the introduction of Smart Phones.

God knows the beginning and the end, and He shares His plans with those who are willing to listen. “Surely the Sovereign LORD does nothing without revealing his plan to his servants the prophets” (Amos 3.7 NIV). God can give us prophecies–even in our fiction writing.

If you would like to start reading the Onoma Series, you can purchase them at Amazon: Eve of Awakening, Bear into Redemption and Mark within Salvation. Be sure to also check out my Shop Page where I have all of my books listed!

You can read more of my book reviews below: