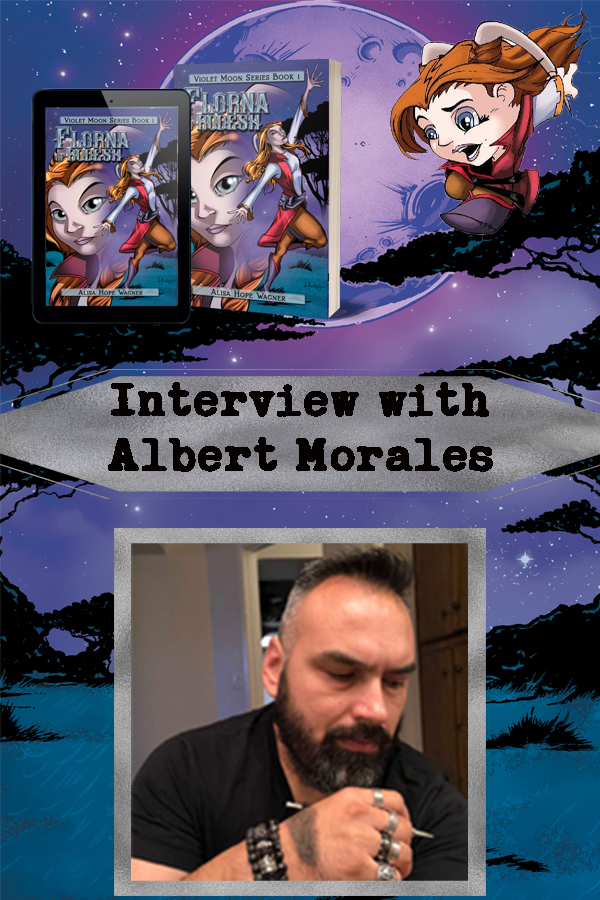 Interview with Albert Morales and his work in the YA Fantasy Fiction novel, F’lorna of Rodesh, which is being offered for free as a Kindle download for a limited time.

1. When did you first know that you wanted to be an illustrator?

I can honestly say it’s the only thing I’ve ever wanted to do, especially in the comic’s field. Being an entrepreneur just went hand in hand with my drawings, as I first started trying to sell my work when I was roughly 9 years old.

2. How do you ignite and maintain the creative energy needed to illustrate?

That’s a great question because I do have to stay focused on certain elements that I respond well to while working on certain subjects. For example, if I’m working on a super-hero book I have to avoid looking at westerns because I’ll want to pull my work towards westerns or start getting ideas for westerns. But being around positive people who have a high level of creative energy really gets me going. You always want to have a friendly but competitiveness with someone to push you and stretch your creative limits otherwise you start, for lack of a better term, shadow boxing and that can lead to a creative standstill if you are not careful. So I always want to compete, learn and grow where I can.

3. What was your first big illustrating gig? And how did it open more doors for you?

The first BIG paying illustrating gig I had was for an independent company. CHAOS! COMICS main illustrator Steven Hughes was very sick and dying, but before he passed, he saw some sample work I had put together of SPAWN vs. GHOST RIDER. The way it was literally explained to me was that he liked it and saw something in it. So when he died, his wife started her own independent label and hired me as their first illustrator leading me to the big show (and my first) – SAN DIEGO COMIC CON as a professional. Slightly before that I was published in the letters page of a PURGATORY book produced by CHAOS! COMICS.

4. You’ve done shows for your work. What do you most enjoy about bringing your work to others?

The biggest charge I get is meeting new people that appreciate the work. You know when you’re asked to draw something on the spot and that person shows you exactly how grateful they are by just smiling, taking it all in, and staring at the book – that’s definitely the biggest compliment. If you can’t feel good about that, or get excited, then I would say you’re crazy!

5. F’lorna of Rodesh gave you an opportunity to delve into a new genre of illustration. Tell us about what changes you had to make and what you learned during this new process?

YES! It was definitely a new genre of illustration for me and some of the people that follow my work. I had received some emails and messages from people stating they were excited and looking forward to what I can do in this genre. Personally, it allowed me to stretch. I’m so used to drawing these iconic heroes, villains, and monsters that people don’t see a lot of softer images from me. Going deeper than that… I’m a bit direct, possibly rough, in nature and that shows in my work, so to be able to present a softer side of my personality is not something I’m used to, but I can appreciate when shown. Others may feel the same way. During the process of the book we were developing a lot of the characters on the spot. Knowing what they look like and how they act now, there is going to be some progression between the books and images presented leading to the next books. It all boils down to growth, something I’m excited about.

6. Working with a writer on a new project takes teamwork and imagination. How did you and Alisa come together to bring F’lorna and her family and friends to life?

I’ve actually known Alisa and her husband Daniel for some time, since we were teens. Daniel had mentioned to Alisa about the possibility of having me come onto the series to help with the art. For me personally, my childhood friends are some of the best I’ve ever had so the answer of working with her was simple. I did keep one thing in mind constantly— because this is a business – was that I did not want to fall short of what she envisioned for her characters. Keeping this in mind I tried being attentive as possible, sending her the rough drafts for every completed image so that we could meet at the finish line together and accomplish what we as a team had set out to do.

7. Creative minds enjoy envisioning ideas that have never been done before. Discuss what you are working on now that is new.

Currently I am working on multiple projects slated for release in early 2019. I have a project for DJ Dimension, we were for 5 weeks at the #1 spot for downloaded house trans music, and the comic we are putting together to combine these arts definitely helped with the marketing. I am expecting a new MARVEL / UPPERDECK card set called MARVEL PREMIER 2019, this is the companies big budget set they do yearly, and my personal book ANNIHILATION JONES. This will be an original graphic novel already creating some buzz with multiple collaborators in various different media-outside the box of traditional comics marketing.

8. What do you do to keep growing and stretching your ability and creative portfolio?

Art is a sensitive creature and you have to nurture it and sell it so that it becomes more. I love sales and I love marketing projects, always have. I like to pay attention to trends, fads, what has worked /what hasn’t, and I like to explore different avenues for not only comics but my illustrations and paintings as well. I’m not afraid to try new areas that have not been explored. On that same note I will also try something that had potential and failed to put my own twist on it and make it a success if possible. Again, it goes back to being creatively competitive. If I had only $5 dollars in my pocket I would love to show you what I can do creatively that would get me to the next level and then the next and then so on and so forth. I keep growing because I like to keep grinding creatively. I want to see how many different outlets I can bring my work into. It’s that constant stereotype that artists are not good at business, and I can whole-heartedly tell you I am not that stereotype.

9. Networking is a big part of what you do? Why are relationship important in your field?

Networking is a big part of any good business. At the same time if you don’t see the potential or benefit for both parties do not be afraid to cut your losses. The relationships I’ve developed over the years have been out of respect and more importantly the ability to produce what you say you can produce. The worst thing anyone can do is oversell and not produce what was promised. It compromises not only your integrity but there are also others that are behind the project that could be waiting for you to complete your end of the deal. However, if you do fall behind show them how hard you are working to get the project done. Communication is key. It lets others know where the project stands, where you are at on the project and it also allows others to make any adjustments they need to make in order to complete the tasks at hand.

10. What is the one thing you would like people to gain from your work?

Each project is different. With F’Lorna of Rodesh... again, it’s about showing depth and growth. I’ve worked on various paintings, illustrations and projects and each presented its own challenges. If I can step back from a project and say I beat you, you didn’t beat me. Then I feel I have really accomplished something. It’s that sense of pride in the work you do, and then how can I build on that the next time around. I want to make you stop ….even if it’s for a second ….to take in what I’ve produced. If you are asking me what I would like people to gain overall……. I would say the easy answer is entertained….but when have I ever done things the easy way!