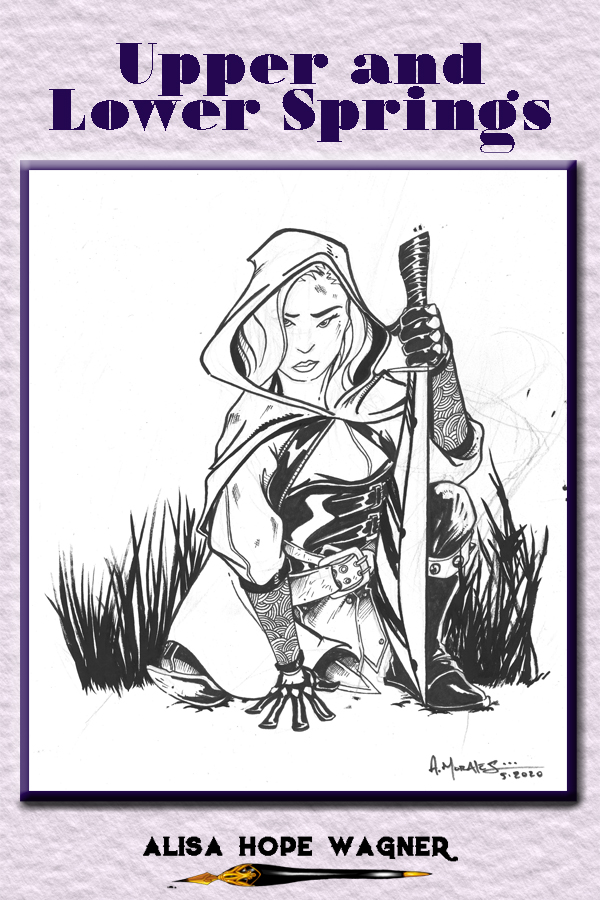 “She answered, ‘Give me a blessing; since you have given me land in the South, give me also springs of water.’ So he gave her the upper springs and the lower springs” (Joshua 15:19 NKJV).

The Daughter fell to her knees after both of her feet landed in her Promised Land. She wiped the sweat from her brow, unknowingly smudging her forehead with the dirt gathered on her palms from her long journey. Strands of her bound hair slipped across her face and stuck to her damp skin. She tried to sweep them behind her ears, noticing for the first time her muddied hands.

She lifted the corner of her garment and wiped off her fingers. Then she lifted the other corner and rubbed it across her face. Her salted tears mixed with sweat stung her eyes, but she no longer cared about the price to her appearance. The sweat, scars and mud clinging to her body were physical evidence of her climb—a climb that doubled as an inward battle, preparing her to firmly grasp her destiny. The Daughter had become a Warrior. She had persevered, and now she walked into her victory.

Her breaths came heavy, but she paid little attention to her heart pounding inside her wearied frame. She got back onto her feet and made slow steps along the perimeter of her land. She was here. She was home. Her acreage spread across the horizon, but she knew it continued past the rising sun. Her Father promised her this land. A woman, a daughter, a warrior, a steward of her Father’s estate—she would not let Him down. She had underestimated the weight of her request, but after years of striving, she had strength to carry the burden of the blessing He bestowed.

As she mentally charted the landscape, a low wave of fear swayed in her stomach. Something was very wrong. She eyed the rising hills shrouded in a sea of green grass—perfect. She glimpsed the grouping of solid trees providing shade—ideal. She reached down and dug her cleaned fingers into the earth and pulled up rich, black soil—unsullied. The land was more beautiful than she could have imagined. Her Father had given her everything she asked of Him.

She scanned the terrain, searching for the reason of her uneasiness. Her breath halted and her eyes darted in desperation, and the full weight of reality knocked her legs back several steps until she collapsed onto her knees. A current of grief poured out of her soul in the form of a despairing moan, and she plowed her hands deep into the ground. Her head dropped onto the grassy floor, and tears fed the parched land of promise until she too thirsted.

The vastness swallowed her tapered cries; and the hills, grass and trees awaited the result of her response. She raised her head and brought her empty hands to her face. She smeared the last of the black soil across her cheeks and sat back onto her heels. A worn but determined expression lined her features, as she struggled back onto her feet. She turned her fixed body toward the overshadowing sun rising in expectation, and she whispered her reply to the attentive ears of the moving wind.

“I forgot to ask for a Spring,” she said. “But I’m willing to go back and fight for it.” The Daughter stood resolutely with her rigid shoulders squared for battle, and she tried to forget the sacrifices of a thousand yesterdays and prepare for the cost of an endless tomorrow. She would have to leave her Promise Land to find her Father, and He would show her where her next climb began. As she turned to leave, she heard the crackling of a thunderbolt and the rumbling of the atmosphere. Thick, grey clouds blanketed the heavens and the Force of Purpose squeezed the sky.

A river rolled like a mighty tidal wave across the darkened skyline, and an inverted torrent engulfed the Daughter’s waterless field. Saturated pools collected around the roots of trees, across the bottoms of hills and in the dips of pastures; and the rich soil flowed evenly across the expanse. The Daughter lost count of the miraculous forming Springs, and the façade of her determination crumbled, exposing a disillusioned warrior on the verge of defeat.

She fell onto her knees once more. Her legs disappeared under a sparkling layer of liquid. She lifted her face and allowed the water to cleanse the sweat and dirt from her skin. The grimy wounds she tried to ignore eased under the soaking of the rains, and her lips opened to take a drink of the formless water well. The sun stayed hidden behind the stretch of built-up blessings, but she felt His promise rise up within her spirit. As a transparent gust rolled across her emptied body and soul, the cool breeze echoed the unchanging power of her Father’s pledge:

“When you fight for the Land,
I will provide the Springs.”

“If a spring has not been opened in a soul, a spring of living water from God’s own Son, no waters can flow and there is no life in you.” – G.V. Wigram

~This fiction verse meditation is taken from my life-renewing book, Our 6 His 7: Transformed by Sabbath Rest. You can find it on Amazon along with my other fiction and nonfiction books.