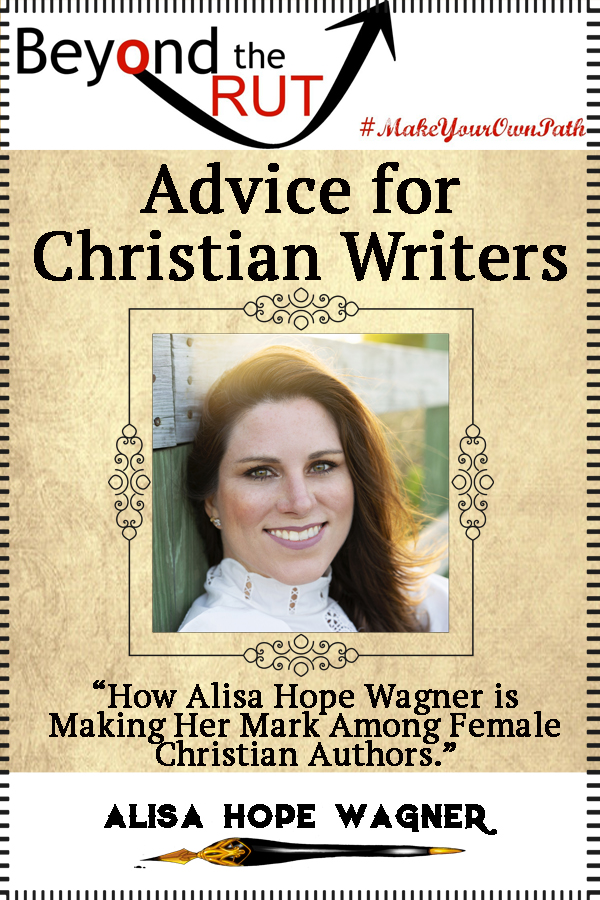 Do you want to be a Christian Writer? Are you interested in how to live a life of faith and writing? Join Alisa Hope Wagner as she offers advice and encouragement with Beyond the Rut.

Listen to Beyond the Rut Podcast with Jerry Dugan and Brandon Cunningham at How Alisa Hope Wagner is Making Her Mark Among Female Christian Authors.

Alisa Hope Wagner is making her mark among female Christian authors with her latest Christian fiction for teens, F’lorna of Rodesh.

Who is Alisa Hope Wagner? It all began with a 40-day challenge. Years ago, Pastor Bil Cornelius of Church Unlimited challenged churchgoers to focus activities towards a dream or goal for 40 days to see what came of it.

That is when Alisa Hope Wagner chose to make her dream of becoming one of the world’s best-selling Christian authors a reality. She wrote for 40 days and it produced the majority of what would become one of her first Christian fiction novels.

Alisa Hope Wagner is a 2018 Selah Awards Finalist who made her debut among Christian fiction authors in 2013 with Eve of Awakening. The Onoma Series would elevate her writing into the Christian fiction series arena. She has published 20 books so far (Alisa’s Amazon Author Page) in both fiction and non-fiction for Christians.

Today, Alisa Hope Wagner’s published works include Christian fiction books, devotionals, and non-fiction works. Her works inspire women to live a life of authenticity, gratitude, and balance. She once appeared on CMT’s show “Made” where she transformed from one of the world’s female Christian authors into a mixed martial arts fighter. We can see why she has also become a certified fitness trainer and fitness nutritionist.

How Did Alisa Hope Wagner Join the Ranks of Female Christian Authors? Well, that is why we posted this interview. Despite Alisa’s educational background in English, she never really pulled the trigger on her dream until a challenge was issued. Listen to this episode as she shares getting past her own introverted nature to write then publish her works for the public to consume.”